Mechanistic aspects of the gas-phase dissociation

Our research is focused on the application of tandem mass spectrometry for the structural investigation of oligonucleotides and their analogues. Modified oligonucleotides bear a great potential for therapeutic applications and diagnostic purposes. Since classical sequencing methods based on enzymatic or chemical degradation often fail in the case of modified oligonucleotides, alternative techniques are needed. A goal of our research is to fill this gap and to develop novel protocols based on tandem mass spectrometry for the characterization of nucleic acids. This also requires elucidation of the fundamental mechanistic processes involved in the gas-phase dissociation of selected compounds. In 2005, we demonstrated how collisionally activated RNA ions dissociate into the sequence-defining c- and y-type fragments. Other analytical work was focused on a number of DNA analogues, e.g. methylphosphonate-oligonucleotides and sugar-modified nucleic acids, which are of therapeutic interest.

Recently, we have extended our research to the investigation of adducts formed between nucleic acids and cytotoxic agents, such as cis-diamminedichloroplatinum(II) (cisplatin, DDP). Cisplatin is still the most widely used chemotherapeutic agent in oncology world-wide. Its cytotoxic effect is based on the formation of 1,2-intrastrand adducts at adjacent guanine nucleobases in DNA and RNA, thus, causing distortion of the double-strand and inhibiting translation. Mass spectrometric analysis of these adducts yields information on the specificity of the reagent, the stoichiometry of the reaction, and provides the armory for a rapid and unambiguous localization of adduct sites. The application of modern analytical techniques for elucidation of the modes of action of anti-cancer drugs can greatly accelerate biomedical research. 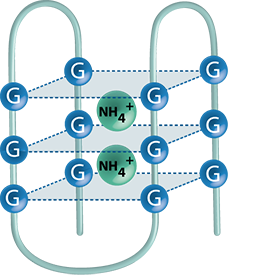